A large global insurance company employing about 31,000 staff began to realise the importance of change management. This was partly driven by their new business strategy to transform and grow the business. They also realised that they needed to build a new organisational culture that would aid this transformation of the organisation, and equip them for new way of doing business.

As part of this transformation the importance and value that change management could add to them achieving their objectives came to the fore and they decided to invest in building organisational change competency.

The sponsor for the change, the Global Head of HR, decided that the approach to building organisational change competency would be though building change management skills in all the levels of the organisation. This was initially kicked off with a Prosci® Sponsor Workshops for 60 executives in the organisation. This was then filtered down to the senior leaders and then the managers and supervisors. The senior leaders and managers attended the Prosci® Change Management workshop for Managers. The organisation decided to build their own eLearning solution for general staff.

The entire HR community attended 3-day Prosci certification training. Learning and development scheduled the training sessions and invited staff to attend each of the sessions that were run. After 18 months of continuous training the organisation decided to purchase a Prosci site licence. They retained the licence for 3 years and did not renew. 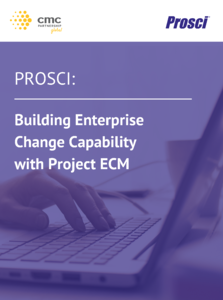 Due to the size of the organisation delivering a significant intervention, it took a long period of time. Many of the participants asked if the senior leaders had attended training themselves. It seemed even though executives and senior leaders attended the training, they did not take the knowledge gained and turn that into demonstrating the ability.

There was no change management plan in place for the building of change competency into the organisation The sponsor, despite supplying the budget, was not active and visible, wasn't building a coalition with the executive, or communicating directly with staff.

Some staff arrived at the session not knowing why they were there and what the purpose of the training was. No measurement of success was put in place. The only success measure was the number of staff trained.

Due to the lack of sponsorship and a coordinated approach to building Enterprise change management (ECM) competency, the project eventually came to an end with no real change to the culture of the organisation or a view that change competency had been built.

Although certified, the HR practitioners were not afforded the opportunity to practice change management and it seems that leaders were not coaching their people through the required transitions. There was no measurement of success, and their site licence was not extended

According to Prosci's research, the following are key considerations when going on an Enterprise Change Management journey

The Benefits of Integrating Project Management and Change Management