How is sponsorship different to leadership?

It is well known that leadership is needed for projects to succeed. Leaders will often supply the budget and other resources, outline the strategy and scope and provide the timing and dates of the project. Whilst these executive decisions are important for a project, they do not guarantee success.

Sponsorship has been number one on the list of top contributors in all of Prosci’s benchmarking reports since 1998. It has a direct impact on whether projects meet their objectives. An effective executive sponsor can increase a project’s chances of achieving its intended business benefits from 29% to 73%, which is the reason the sponsor role can be considered as one of the most critical factors of successful change management. 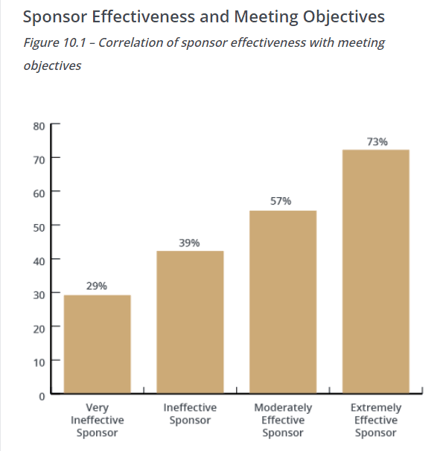 So how is sponsorship different to leadership? There are 3 key roles that participants of Prosci’s Best Practices Research have identified for sponsors. They are: active and visible sponsorship, communicating directly and building a coalition.

The Role of the Sponsor

Acquiring project sponsorship is a practical first step when ensuring project success. However, it is important to understand that not everybody can or should perform the role of a sponsor in a project. The role of the sponsor is an active title that requires participation and involvement within a project, it can vary across levels or functional area and it is possible for more than one sponsor to be required when providing sponsorship for a change effort. Below are the expected responsibilities of a sponsor when implementing change:

The sponsor’s job is to ensure that the project goals are aligned with the entire company strategy, overcomes resistance by gathering support from other senior executives, and provides direction throughout the project. The executive sponsor role may seem that of a project manager, however, in contrast project managers are responsible for the daily execution whereas the sponsor has a far more strategic position, creating the correct condition for the success of the changes being implemented.

There are 2 ways a sponsor can display active and visible behaviours: supporting the team and championing the change.

Examples of how a sponsor can support the team include: proactively removing obstacles for the change management team, providing resources and budget and understanding the whole change process, the impact of the process and the desired future state it aims to produce.

By championing the change, sponsors should be building excitement and enthusiasm for it and becoming one of the first adopters of the new way of working.

Active and visible sponsorship will increase the profile of the change, as individuals across the organisation begin to see the new ways of working role modelled by a leader.

Build a Coalition of Sponsorship

The primary sponsor should take lead when building and maintaining a healthy coalition of leadership who fully support and encourage the changes being made, iterating it throughout the entire organisation. The sponsor is also responsible for motivating the other main business leaders and stakeholders in an attempt to ensure they advocate for the change and legitimise it within their area of the organisation. A coalition of sponsors is particularly important for the changes that may stretch across multiple functions of an organisation.

The change manager should also support the sponsor by playing an enabling role for the senior leader. Providing additional support and encouragement to both executives and senior leaders will prove beneficial surrounding their sponsorship role. The change manager can also enable help leaders to become more effective sponsors during the process of change by offering coaching and facilitating specific sponsorship activities. Once the change management teams are effectively supporting the role of the sponsor they then become a crucial part of the process when executing change successfully ultimately improving the overall outcome of the project.

Many employees who are being impacted by change often want to fully understand the reason behind the changes from leaders at the top of their organisation. Many senior leads prefer to delegate the message down the chain eventually feeding it back to the employees through specific points of contacts. An effective sponsor would in fact consider the need for change within the organisation, and ultimately set the prioritisation of change by directly engaging with those impacted.

Here, the word directly is important. Face to face is the best way to communicate and where possible should be used. Leaders should not shy away from ‘getting out there’ and meeting with those impacted. Here are some further tips to help communicate directly, these are:

How can I learn more?

Become equipped to support and guide your sponsors during change. Take the next step and become a Prosci certified change practitioner with CMC Global! Find out more.

Seven Success Factors to Building a Community Of Practice