Have you ever started a task at work that should be simple and quick then found it to be crazy hard?  If so, you may have run across an example of a business concept that has been becoming more and more important. The concept is Organisational Debt, and I am starting to believe that this is the number one reason for establishing Enterprise Change Management.

You have to avoid debt because debt makes the system more fragile.

I recently had an experience that brought this concept home for me. I was performing what I thought would be very simple project, consolidating proposals from different sources into a single MS Word document. I figured this would take me a few hours at the most. Unfortunately, it took me more than a day and a half because I copied content from existing templates that had clearly had gone through several iterations of the text, pictures, and formats being cut and pasted in to them.

As a result, the document became painfully difficult to work with. I had to back up, remove all formats, and start clean. Setting aside for a moment my own administrative incompetency, this wasted time is the accumulated interest from Organisational Debt demonstrated on a small scale. On a larger scale, Organisational Debt can paralyse a company.

Let’s unpack Organisational Debt for a moment. Debt is a common concept. Anyone with a credit card or loan understands financial debt. One takes a loan for a short-term purpose to pay it off in the long-term only with the additional cost of interest. Organisation Debt works very similarly.

Organisations make decisions based on short-term requirements only to create barriers that they will have to manage in the long term. The “interest” from Organisational Debt is the cost of untangling all those decisions when trying to make change. Avoiding this interest becomes a key argument for robust and continuous Change Management approach.

People who think about change, agility, and adaptiveness have understood this intuitively for a while, but to have it so aptly described by Steve Blank in his 2015 article “Organisational Debt is Like Technical Debt but Worse” has proven highly beneficial to recognising and solving the issue. In his post he says “Organisational Debt is all the people/culture compromises made to ‘just get it done;’ in the early stages of a start-up.”

More recently, Organisational Debt has been applied to organisations of all maturity levels, not just start-ups, to ascertain the accumulative and longitudinal effects of short-sighted decision-making on the organisation's ability to respond to change.

An extreme example Organisational Debt and its impacts happened a few years ago with a client who was planning to install a new ERP system. Under the best of circumstances, this is a risky, complicated, and expensive change. The client rightly recognised the need for help on the people side of the change to mitigate the risk and improve adoption of the system.

To plan properly, we needed to collect diagnostic data and perform situational analysis. This proved quite frustrating as they were unable to answer the most basic of questions such as:

And it only got worse from there.

The primary reason for this lack of clarity was that this company had failed to manage their Organisational Debt accumulated through their 30 years of existence. They had started with a very simple retail product and built up to massive, individual, and highly customised projects. They were very successful, but their success was exactly what was hindering their future.

They had never looked back at the decisions they made, the processes they put in place, or the products they had launched and rethought or re-engineered them. In other words, they had never retired any of their Organisational Debt.

Now, they were facing years of preparation before they could make a positive and logical change resulting in a massive delay realising the return from their investment. In effect, they were paying interest on their debt.

Download: Why Building Change Capability is a Smart Investment 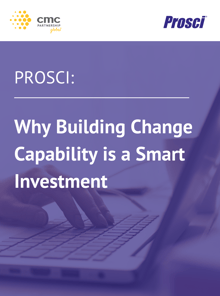 From our experience, Organisational Debt shows up in multiple ways. One is operational debt that results from complexity created by expanding the organisation. As they grow, organisations add new processes, new markets, new products, etc. but they often fail to eliminate or reduce those processes, markets, and products that have become redundant or obsolete.

The result is hidden costs to doing business that slowly laden the company and eat up resources that could otherwise be eliminated or reassigned. Another form of debt is knowledge debt. This occurs when people move within an organisation or leave the organisation. The intent of past decisions is lost and all that remains behind is the effect of those decisions good or bad.

A third form of debt is cultural debt. This describes the behaviours and practices that have become ingrained in the culture that fail to evolve with the changing environment. Taken separately operational, knowledge, and cultural debt are a major challenge to change efforts. Taken together they can be fatal.

Like financial debt, getting out of Organisational Debt is best handled by 1) not accumulating it, and 2) strategically reducing the debt you have already. Having an Enterprise Change Management (ECM) capability is one way to affect both situations.

By creating a framework for change that is utilised at all levels and by increasing the speed of adoption, change utilisation, and proficiency in new ways of working, your organisation will be better able to reduce its Organisational Debt and increase its responsiveness.

Companies with low Organisational Debt have a sustained strategic advantage. They are able to “out change” their competitors, be responsive to internal and external pressures, and more rapidly realise their return on the investments they make. Having an Enterprise Change Management strategy is a primary enabler to reduce or eliminate your debt.

Our Enterprise Change Management (ECM) workshop teaches you how to enhance your organisational change management capability.  Our interactive, online, Prosci instructor-lead programme is concentrated on how to best internalise change management practices.

The workshop is available both through public open-enrolment and to be delivered privately for organisations.

The Importance of Change Management in Challenging Times

The Benefits of Integrating Project Management and Change Management